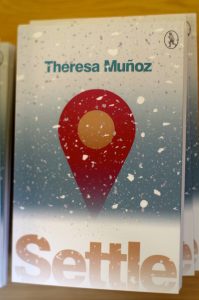 Settle (Vagabond Voices, 2016) was launched in 2016. There are poems about immigration, technology and other pertinent issues that dominate the present day.

“Theresa Muñoz writes with a questioning clarity, a precise observation of the material world undercut by doubts and feelings of impermanence. A sense of movement – whether of migration or language or light – runs through her poems. She has a fresh and engaging take on living in a constantly shifting world” – James Robertson, poet & novelist

“These poems skilfully ruminate on the strength and complexity of the human spirit, no matter where in the world it ends up” The List 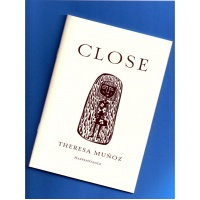 was launched as part of the HappenStanceShowcase at the StAnza festival on St.Patrick’s Day 2012.

HappenStance Press: “Her mental geography crosses continents as she explores belonging and exclusion, home and exile. Although her tone is often wistful, the form is playful: the shapes and fragments of the poem on the page capture shifting, changing voices, many of them a little lost.”

Afric McGlinchy:  ‘There’s a painterly impressionism here, of landscape, climate, intimacy… the whole is gossamer-like, tender, sad. The title of the chapbook, Close, with its potential for a secondary meaning, is poignant and apt. It is in the accumulative effect of this chapbook that Muñoz communicates her internal world, her fragile and migrant soul.’

Nuala Ni Chonchúir: ‘Muñoz favours a haiku-like simplicity of short lines, natural references and small epiphanies, though her poems are in sections and often run to two pages. There is definite talent here and she is at her best when probing and unpicking close relationships. More of that, and she is sure to produce further wonders such as the affecting penultimate piece ‘Hard to Know’. One senses a poet finding her stride.’

Colin Will: ‘Another excellent collection from HappenStance. Theresa is a new poet but she has a fine record of publication in magazines… Born in Canada and now living in Scotland, some of her poems (‘Travelling’, ‘Home’) explore questions of identity and exile with great subtlety and feeling’.

Nick Asbury: ‘Close’ is a good title for this collection, which is full of telling details, short one or two-word lines, and a sense of intimacy and vulnerability throughout. It’s also an appropriate word given the poet’s evident knack for a good closing line. In several of these poems, I found myself admiring the way she achieves a real ‘sense of an ending’ without resorting to the usual trick of closing end-rhyme.’